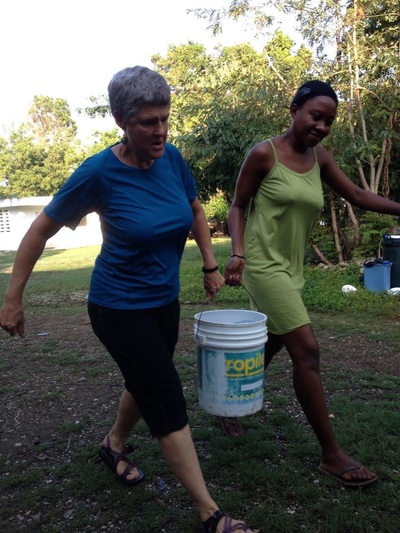 Working together - Bringing clean water to the compound-Petit Goave. 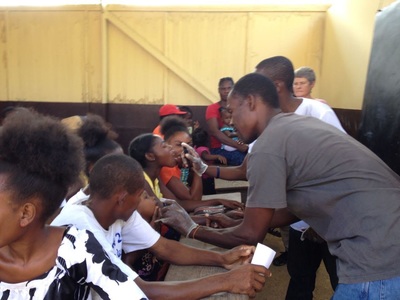 Homeopathy at work in Petit Goave 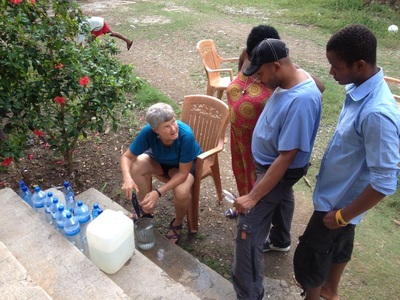 Stories From The Field

Cholera in Haiti after the earthquake of 2010 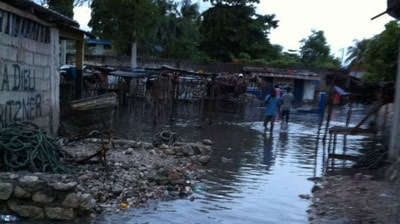 Cholera is an acute, illness caused by a bacteria which is usually found in water or food sources that have been contaminated by feces from a person infected with cholera. To prevent spread of cholera, purified water, good sanitation and good hygiene are of utmost importance and in fact, NECESSARY.

Following Hurricane Matthew, an HWB team arrived in Port au Prince on October 13. They arrived with a portable water purification system, food, solar chargers for laptops and phones and lots of homeopathic medicines (Thank you Hylands, Hahnemann Labs and all of the homeopathic pharmacies which have contributed to the effort). Their first 4 days were spent in Petit Goave which has so far been spared of cholera. Team members and HWB trained Homeopathes Communautaires got to work distributing homeopathic prophylaxis to protect residents from cholera. Residents of the compound where the team stayed in Petit Goave requested more water filtration systems to better help their people get clean, drinkable water.

On October 17, the team left the relative safety of Petit Goave and on advice from local government officials are heading for Duchity, near Jeremie where there is a lack of healthcare. Any area hard hit by the hurricane are more at risk because of the destruction of infrastructure, flooding, and lack of clean water. The team is taking precautions to keep themselves and residents safe - good hygiene, use of gloves, purifying water for remedy distribution and good sanitation overall.
Cholera in Haiti: One Year Later CDC scientist conducting epidemiologic study on water, sanitation and hygiene
On October 19, 2010, ten months after the catastrophic January 2010 earthquake in Haiti that killed over 200,000 people and displaced over 1 million, the Haitian Ministry of Public Health and Population (MSPP) was notified of a sudden increase in patients presenting with watery diarrhea and dehydration in the Artibonite and CentreDepartments. On October 21, 2010, the Haiti National Public Health Laboratory identified the pathogen as Vibrio cholerae.  One day later, the first cholera outbreak in Haiti in at least a century was officially announced.

​To date, over 470,000 cases of cholera have been reported in Haiti with 6,631 attributable deaths. After one year, this marks the worst cholera outbreak in recent history, as well as the best documented cholera outbreak in modern public health. Since the beginning of the outbreak, CDC has worked closely with MSPP to combat the cholera epidemic and reduce the impact of the disease.

One year after the beginning of the outbreak, the case fatality ratio has dropped below the World Health Organization 1% standard, and more people have access to clean water. However, cholera continues to spread throughout Haiti. Experience from past cholera outbreaks around the world suggests that Haiti may have ongoing cholera transmission for years to come. Improving Haiti’s water and sanitation infrastructure is critical to achieving large health gains and reducing the opportunity for cholera to spread. To date, the United States Government has spent over $75 million on improved water, sanitation, and hygiene facilities, establishing and running cholera treatment centers, training Haitian health care workers in preventing, diagnosing and treating cholera, and providing treatment and prevention materials. CDC will continue to invest in cholera prevention infrastructure and activities, while also maintaining relationships with other agencies and partners to reestablish and strengthen public health systems in Haiti. Read more on CDC website.

On October 6, 2016, Hurricane Matthew, the first Category 4 storm to make landfall in Haiti in 52 years, wrought destruction on this island nation.   As HWB Executive Director, Holly Manoogian, CCH, kept close track of weather and conditions in Haiti, she was in regular contact with our colleagues in Haiti. They asked us to send teams as soon as the extent of damage was known. When it was safe to travel, our first team left for Haiti on October 14.  Click here to read all about HWB's four weeks in Haiti providing health care to areas hardest hit by Matthew.