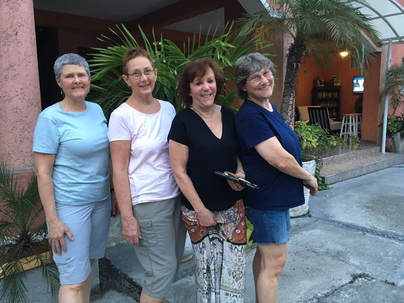 Landing in Haiti was again a real experience. People singing, clapping and if we were not in an airplane, they would have danced. I so understood their sentiment as I want clap and sing when I go back to my home country. Seeing all these amazing faces and assortment of hats, I knew I had made the right decision to come back to Haiti.

So nice to have Lauren right outside of immigration, a familiar face, accompanied by Dr. Joey who was to drive us to the guesthouse in his white pick-up truck. We climbed into his big white truck.  You never know where you are in Port au Prince; many crowded streets; lots of people trying to make a living with whatever is available to them; noise, garbage and pollution; but it has its charms.

Last night Lauren briefed Wendy, Devra and me on what the next day was going to be about--the curriculum that was going to be taught to a group of doctors and nurses who had been studying with HWB and will graduate in March. An amazing accomplishment to pass the art and science of homeopathy to professionals. And of course, Lauren made sure to instill again the customs and etiquettes of Haiti. After a spaghetti dinner we all turned in early as we were going to be picked by Dr. Joey at 6:00 am and class would start at 8:00 am.

Dr. Joey arrived at 6.30 am so time for us to have our coffee, not Starbucks but Haitian coffee is not bad at all. We all climbed into the truck to go to the Haitian Medical Association where the class is held. But we had to make several stops, pick up pattis (pastries filled with savory fillings) and drinks. We arrived promptly at 8 am to……………just wait. The students trickled in and class started at 9:00 am. Haitian time is simply different--you know, a cultural thing--and we were off to session 3.

Lauren started the class with a review followed by "trauma and injury." In the afternoon, there was a long discussion on acute & chronic diseases. What was interesting is that Lauren put the emphasis on what this really means in the Haitian culture, which was very useful as you just cannot assume it is the same because is simply isn’t true.

I was very impressed with this program.  The last time I came to Haiti with HWB was when we were teaching lay people. Taking it to the professional level seemed the right course to take by offering doctors and nurses this amazing modality of healing.
Watching and hearing their discussions showed their curiosity and interest in learning homeopathy.

I am so impressed and very happy to be back with HWB. 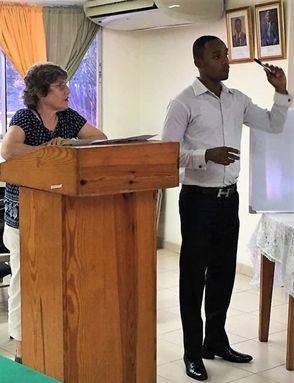 Today was the second day of class (Session 3 of 4). On the way to class we had a wonderful discussion with Dr. Joey Prosper about his vision of expanding homeopathy in Haiti. He shared his excitement of treating parasites & anemia with homeopathy. Lauren covered several topics today, including posology, dosing, obstacles to cure, and Hering's Law of Cure.

It was so exciting to see the rapid growth in comprehension shown by the students from yesterday to today! After lunch I posed as "the patient" and the class acted as "the homeopath" as we worked through a hypothetical case. It was so impressive to watch the students quickly identify strong symptoms & choose the correct homeopathic medicine. These students grasped complicated concepts so much more quickly than many of the students I have taught.  They were able to shift from allopathic to homeopathic ways of approaching a case. I was also impressed by the depth of the questions asked by the students.

On the evening of our first day of class Lauren was asked by a doctor in the class to consult on a difficult case. Wendy Pollock & I accompanied her to the clinic, where we found a severely ill 52-year-old man, who was extremely lethargic, lying in a very hot clinic room hooked up to an IV.

This man had been in the clinic for 7 days and was not responding to well- indicated antibiotics. He had tested positive for H Pylori & Typhoid. He had a urinary tract infection, high fever, 39.5 degrees C (103 F), an inguinal hernia, and a history of alcohol abuse. He was severely dehydrated & anemic. He was obviously very weak and appeared as though he might not survive. His speech was difficult to understand; it was as though he did not even have the strength to speak. The doctor asked for Lauren’s help in the hope that homeopathic medicine might be effective where his own medicines were not proving to be adequate.

After a few well chosen questions, Lauren gave the patient a dose of a homeopathic medicine. We left wondering if he would be alive the next day. Today in class we were astonished to learn that the patient was much improved! He had no fever all night and had no more abdominal pain!  He ate breakfast this morning and did not vomit. This case demonstrated to all of us the power of homeopathy even in a situation that appeared almost hopeless.

All in all, the day was inspiring and successful.  I feel confident that this group of budding homeopaths will be on the forefront of homeopathy in Haiti. 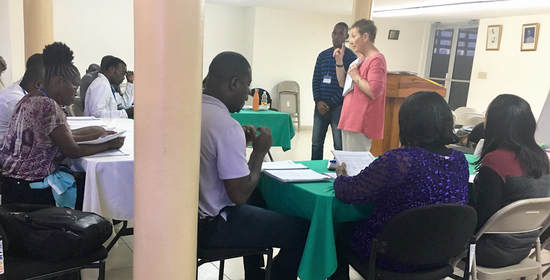 While Lauren & Dr. Joey went to the Ministry of Health for an early morning meeting to plan for HWB’s future,  Marina, Devra, and I had a morning off, in which we enjoyed fresh mango & Haitian coffee under a palm tree at the guest house...Sweet!

We held clinic today at Dr. Joey’s office with three groups of passionate students mentored by Dr. Devra, Marina, & myself. Lauren supervised & James managed the pharmacy. MANY patients were seen by the homeopathic students, who demonstrated adeptly their compassion, & breadth of knowledge of clinical skills. There’s a  palpable camaraderie amongst the students, mentors and teachers that will be sustained well after this class graduates. HWB has done an admirable job at providing a sustainable model of homeopathic care in Haiti through this professional course. 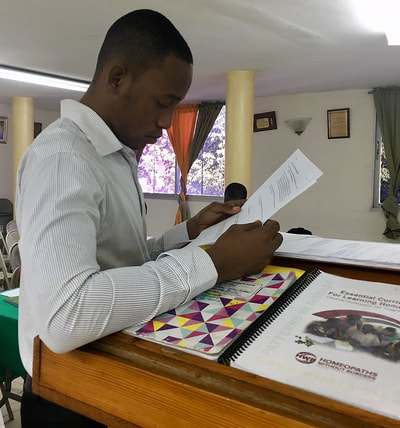 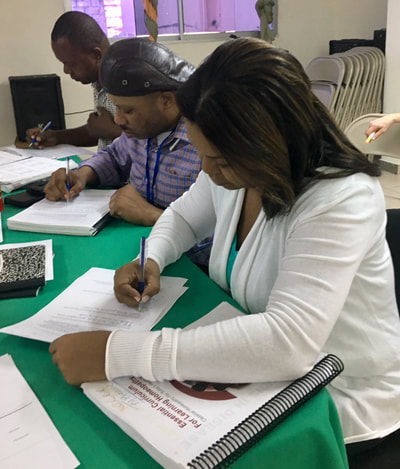 This morning we were fortunate to go to a private school in Port-au-Prince to offer consultations to the children there. It was called Ecole Adelia Felix and we were able to treat about 30 children ages 8-12 with a variety of concerns. We also met the principal of the school and his wife, who were lovely. They served us fresh-squeezed mango juice and crackers. They also invited us into their home to use their bathroom, which afforded us a peek into a Haitian home.

In the afternoon we had our second day of clinic at Dr. Joey’s office. My group had many lively discussions as the students continued to grow in their understanding of case-taking and homeopathic prescribing.

One of the medical doctors in the group put forth an argument against the remedy that the others had chosen. I was not sure that he felt comfortable with the end result, but on his way out he thanked me and told me how much he learned today. It was exciting to see them hone in on subtleties of case-taking such as center of gravity of the case and delving into what really was the primary concern of each patient.

At both the school and Dr. Joey’s clinic, we saw time and again the deep traumas that many of the people we saw carry around. Children as young as seven years old who could not remember the earthquake personally described the terror of seeing houses collapse. They live with fear and absorb it from those around them on a deep level.

We are looking forward to another day at the school in the morning and the clinic in the afternoon tomorrow. 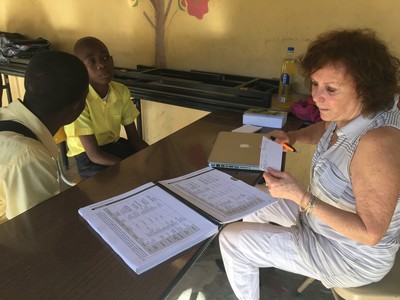 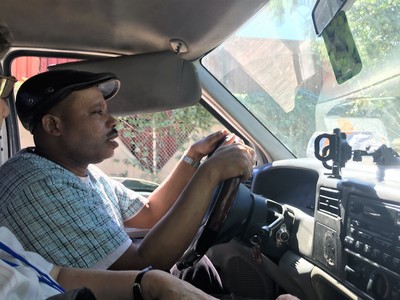 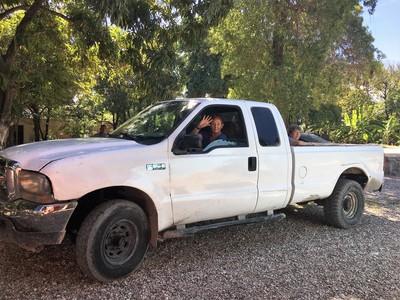 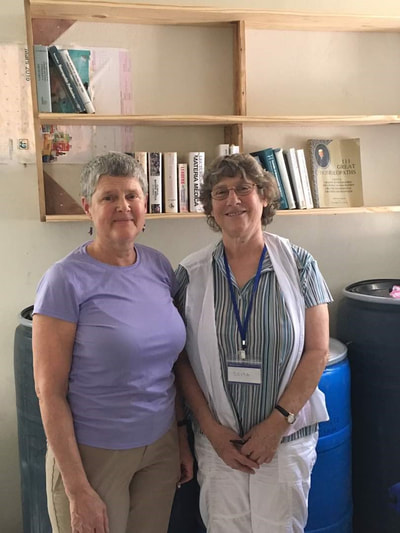 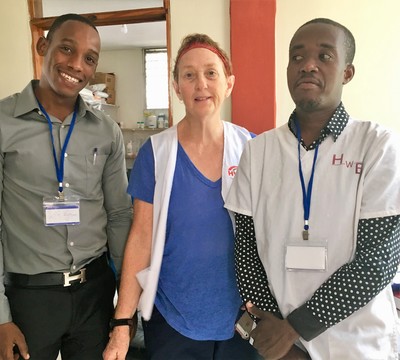